Takeaways from the Book “Creativity, Inc.”

Creativity, Inc. was written by Ed Catmull with Amy Wallace. Mr. Catmull was the driving force behind the development of the company Pixar. 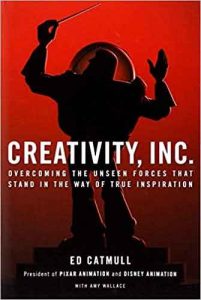 Pixar is a well-known computer animation film studio that later merged with the Walt Disney Company.

Pixar is a company that must produce creative movies in order to survive. Many businesses do not have to rely on creativity to this extreme to prosper. However, all businesses regardless of size or purpose, need some degree of creativity, innovation and challenging the status-quo to succeed. This creativity can be in the form of new internal processes or the development of new marketing methods, products or services.

Mr. Catmull says his two boyhood idols were Albert Einstein and Walt Disney. Throughout the book, we can see where profitable creativity is a blend of outside-the-box thinking balanced by the structure of science and business principles. The book tells the story of Pixar. It is a wonderful business story and many thoughts for leading and managing are presented. I’ve chosen a few that could be helpful to business owners and leaders.

Takeaways for the Business Owner

People tend to resist change out of fear. For business owners and leaders, this fear is around the risk of failure in trying a new idea. Indeed, failure could result is lost time and money. On the other hand, successful ideas help companies prosper. Risk can be reduced by properly researching and vetting an idea before spending the time and money on full idea implementation. By the way, there could also be risk in doing nothing and simply maintaining the status-quo. What are your customers and competition up to?

Get the Right Team

Pixar utilized two techniques: A Braintrust and Notes Day. The Braintrust was used to assess each movie that was being made. Candor and honesty were required. It was made up of a few smart and passionate people. Notes Day was an opportunity for all Pixar team members to have input and ideas in solving some of Pixar’s problems. The point is the leaders utilized the thoughts and ideas from their team. They did not believe that they had all of the answers. How do you utilize your team?

Conder Business Solutions has developed a creativity process called the System of Pi™ (Profitable ideas) specifically for smaller organizations.  The system incorporates many “large business” concepts, but they have been refined to fit the needs of smaller businesses.

Contact us today and together we can begin challenging the status quo.